A Sad Day at Solaluna

It is with a mixture of sadness and deep gratitude that I write to you about the life and death of my mother, Geraldine Stewart.

It has been a long trip. She had a good run.

She had her share of suffering and hard times, her share of tangled days and anxious nights. Yet the plainest thread that runs through all, evident and indelible, is her love in the world. That is the thread that remains.

What remains is the care she instilled in her children (all 8 of them), and her affinity for the trees and flowers, birds, butterflies, and frogs of the world.

If you began coming to Solaluna after 2008, you may not have ever met my Mom (at this point, she took to doing her yoga at home). Still, it’s possible you could’ve bumped into her at the Oberlin Farmer’s Market, at IGA, or other spots around town, walking, or driving a maroon Subaru station wagon. 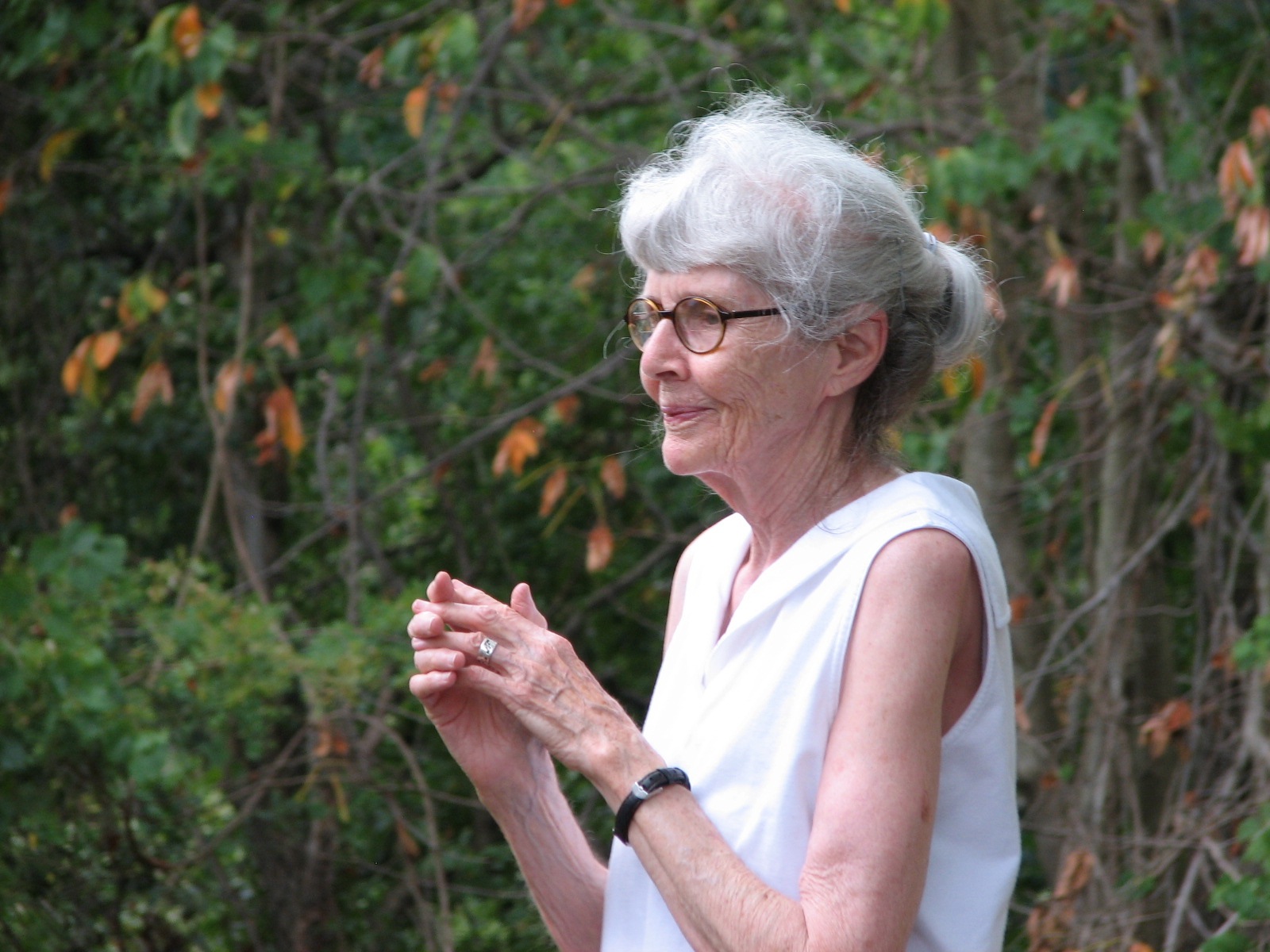 Especially if you did not know her, I want to tell you something about her because there is so much of her in this yoga studio, and so much insight to find in her life.

Mom began doing yoga in the early 1970’s after giving birth to the last of her children (me and my twin, Ben) at the age of 42.

Describing her pregnancy and our birth as difficult would be an understatement (we were a month overdue). Yoga was a balm. It opened up a new world for her.

If you were to ask her about yoga at any point over the last 45 years, she would tell you that it was essential to her life, that in several senses it saved her life.

Mom didn’t see herself as especially adept at asana, yet when she was attending classes at Solaluna she inspired so many people younger than herself with her practice.

And it was among the most constant things in her life: ginger tea in the morning and then yoga with her blue mat on the blue wool rug in the living room.

Over the past two years, different ailments took a toll, but she adapted her practice to serve her changing circumstances.

We had a really challenging summer that involved multiple hospitalizations, frustrating coordination among different arms of the healthcare system, and finally a confirmation of cancer in her abdomen.

Mom opted not to pursue treatment, and her clarity with this choice seems to me directly connected to the gifts she found in yoga. What she found beyond flexibility, strength, and even beyond the sense of calm was the possibility to meet the certainty of her own demise with grace and acceptance.

Even as formal asana practice became shorter and less active, even as it eventually ceased altogether, there was yoga. Caring for her became a familial and a communal yoga, with Mom as the heart at the center.

My good friend, John Seyfried took the photo below in the fall of 2003. It is a picture that speaks for itself. 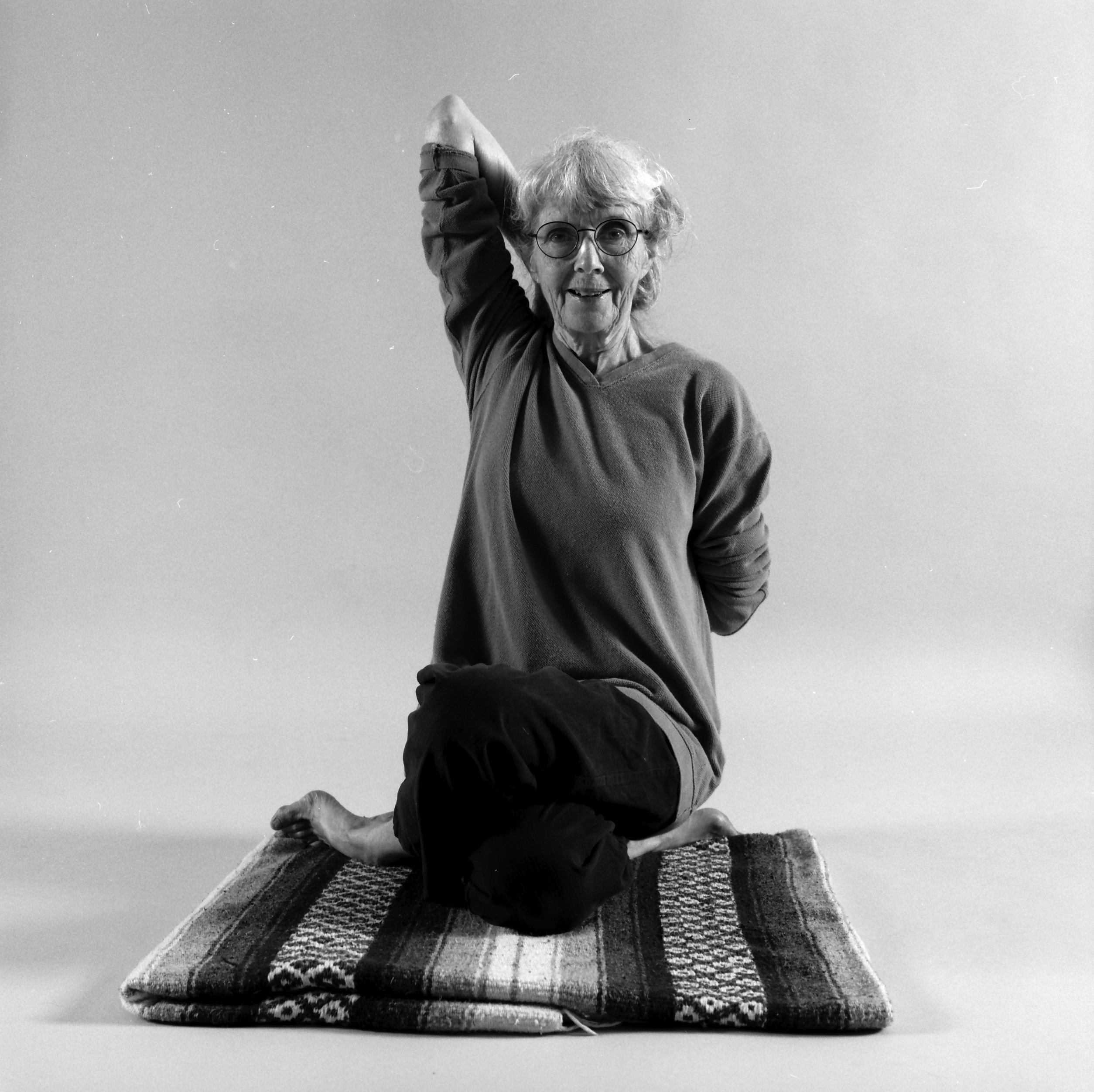 So Geraldine, my Mom, my teacher, my student, my friend, you are deeply, achingly missed.

When it comes to conducting classes in moments such as this, I’ve found for myself that there is a solace in sharing the practice. This is to say, I will teach my usual 9:00 and 11:00 AM sessions on Saturday, October 3rd.

I may be a little rough around the edges and I will shed tears, but I don’t mind. If you’re ok with that I hope you’ll attend.